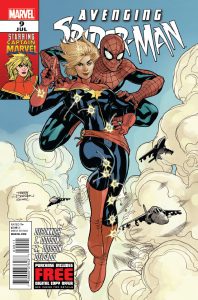 Avenging Spider-Man #9 1st Appearance Captain Marvel: Disclaimer: Comics To Invest In is an article that is solely meant to be used for entertainment purposes. We are not giving you any actual investment advice or telling you to put your money into any of the books we discuss. This is simply our non expert opinions on collecting. Okay now that that’s out of the way let’s begin!

This article contains Avengers Infinity War spoilers, but honestly if you haven’t seen it by now, go watch it!

Now at the end of Infinity War we are shown Nick Fury rushing to page someone. Okay now I have to take a second here but seriously is he still using a pager, do you young viewers even know what a pager is? Now I get it the point being made is that the last time Nick Fury contacted Captain Marvel pagers were still being used. Okay so if that is the case why did shield create some type of flashing emoticon to represent Captain Marvel on the pager. They could have just had her name written like a normal person would store a contact. Do you know how much money that would have cost to program back then??!!! Anyways I’m going off tangent, so the point is Captain Marvel is going to be huge. Like mega huge.

In Kevin Feige We Believe

Kevin Feige has announced that Carol Danvers aka Captain Marvel will lead the Marvel Cinematic Universe going forward, and for Nick Fury to call her means she must be very powerful. So what does this mean for collectors? Well it is evident from past book sales that powerful characters portrayed by huge actors (Brie larson is an Academy Award winner) see upticks in book value. We are talking major upticks.

From what we have seen so far this is no different for Captain Marvel. In the last two years the first appearance of Captain Marvel, Avenging Spider-Man #9, has risen 5x in value. Originally selling for $30 in a CGC 9.8 a few years ago and now selling for $650!

In April an online auction for a CGC 9.4 Avenging Spider-Man #9 1st Appearance Captain Marvel sold for $72. Well two months later a Raw 8.0 copy sold for $202 in another online auction. You can see the type of gains that have already happened before the majority of people have even seen Brie Larson speak a line. Once this Academy Award winning actress gives a stellar performance, the sky is the limit!

Even though this book is already expensive we still recommend picking up the highest grade you can afford now as we predict it will soar to even new heights once the first trailer is released.