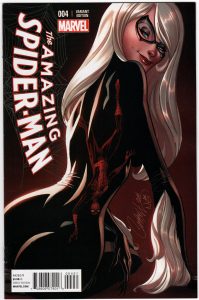 The Amazing Spider-Man #4 JSC Variant 1st Appearance Silk: Disclaimer: Comics To Invest In is an article that is solely meant to be used for entertainment purposes. We are not giving you any actual investment advice or telling you to put your money into any of the books we discuss. This is simply our non expert opinions on collecting. Okay now that that’s out of the way let’s begin!

First if you missed our article on The recently announced Spider-Man spinoff movie Silk, check it out here: https://toynigma.com/spider-man-spinoff-movie-silk-a-go-at-sony/

Now a bit about Cindy Moon better known as Silk: 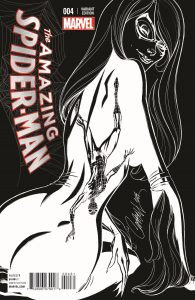 Cindy Moon is a super smart teen with an eidetic memory. Her parents want her to study but she just wants to play hockey and hangout with her boyfriend Hector. Her mother finds out about her secret boyfriend and forces Cindy to skip hockey and go on the field trip to General Techtronics. Cindy is ticked off and tells her mom she hates her.

At General Techtronics the same radioactive spider that bites Peter Parker falls onto the ankle of Cindy giving her a bite as well. Cindy is given powers like Peter except she produces webbing organically from her hands. She couldn’t control her powers at first at ends up webbing her parents.

Cindy’s family was approached by Ezekiel Sims a guy with powers like Spider-Man. Cindy’s parents agree for Cindy to go and train with Ezekiel. A vampire like creature named Morlun starts sucking the life force out of Spider heroes. Ezekiel freaks out and locks Cindy inside a high tech building to protect her. 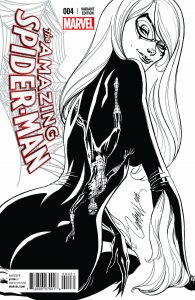 Spider-Man heroes and villains become iconic among fans. Spider-Man is arguably the most popular Super Hero in the world and all characters associated with him achieve extraordinary levels of fame rather quickly. Just look at Miles Morales, but more on that in an upcoming article!

Now the reason we chose the The Amazing Spider-Man #4 JSC Variant 1st Appearance Silk to invest in is history. Black Cat covers by JSC have reached new levels in value and are always wanted by collectors. This book features the first appearance of Silk as well as a fantastic J. Scott Campbell Black Cat cover, double score!

The Amazing Spider-Man #4 JSC Variant 1st Appearance Silk cover comes in three versions: Color, Black and White, and the Negative cover which is limited to 1000 issues produced. When looking at recent sales we can see that all three covers are selling out and are becoming harder and harder to find. You may or may not want to get your high grade copies before the movie is released.

That is all for this one toy and comic fans, until next time!